Too Young to Communicate

In the speech therapist's office this week I met a woman with one of the cutest little girls I had ever seen. This little girl had blonde pig tails and bright-colored glasses and it wasn't long before she and Elanor were busy playing (near) each other. The mother and I started chatting and it turned out that the pig-tailed girl was almost exactly the same age as Elanor, literally only one day older. As I came to find out, this wasn't the only thing they had in common.

In the midst of our conversation, Elanor came up to tell me with her talker that the chalk she was drawing with my purple. "Oh," said the mother, "my daughter has a device too. It's a Touch Chat. It only has two buttons, but she's still not very good at it." I explained that we had also started with only a few buttons, almost a year before, when Elanor was 19 months old. Since then Elanor's vocabulary had grown with her. My new friend seemed confused.  She asked "But how did you get a device when she was that young? I wanted one for my daughter then but they said I was ridiculous."

When Elanor was 17 months old I knew she had apraxia. I knew it the way I knew her eyes were blue or her hair was brown or that she liked graham crackers. It was many more months before I was able to convince others of this fact (that's the subject for another post.) After seeing so many obvious signs, I had used my powers of Googling to look up videos on YouTube of apraxic children speaking, mostly to reassure myself that Elanor would eventually be able to talk. Along with many helpful videos of adorable children with imperfect speech, I ran across one video of a little boy using Proloquo2go to ask for a popsicle. What a miracle, I thought. Elanor needs that!

Neither our private nor our county speech therapists had brought up AAC to us before this point, and their responses to my inquiries were wildly different. The private therapist said that it was certainly something we could consider for the future. She suggested LAMP Words for Life (which uses motor planning principles, similar to Speak for Yourself) and said we could do a trial with it at some point. She stressed that a lot can change between 18 months and 2 years, and thought a device would be something we should consider getting after Elanor's second birthday. The county therapist's reaction was considerably more negative.

This was the same woman who, on our first meeting, told me that Elanor's speech was probably being held back because she had too many ASL signs. I wasn't expecting a good response from her on the AAC front, and I got exactly what I expected. "She's way too young for you to be thinking about that." she said. "She could start talking any day now. You shouldn't give up on speech." We switched to a new county therapist pretty soon after that.

We ended up trialing Words for Life with the private therapist. On her very first time ever seeing the app, after only two models, Elanor told the therapist she wanted the little toy car to "go." I watched her hit the button, smile, and say "guh." This child could not say "guh." She couldn't say "ma." She couldn't say anything. After hearing this story, all four of Elanor's grandparents surprised us when her first iPad with Speak for Yourself was delivered to our house.

Dear Elanor,
Your Grandmas and your Grandaddy love you.  We all want you to Speak for Yourself.  You will be surprised by a package in the mail soon.  When you get it, call your YaYa and she will tell you the rest of the story.
With all our love,
Grammy and Bubbee


Here is little 19 month old Elanor seeing Speak for Yourself for the first time:

Obviously she was not too young for it.

Our therapists had different responses to my inquiry on AAC, one better than the other. However, I don't consider either response to be in Elanor's best interest. In a perfect world, a therapist would see an 18 month old Elanor with almost no sounds and absolutely no words and they would be the one to bring up AAC. They would stress her need to communicate immediately. After all, most 18 month olds can speak, and the fact that a lot changes between 18 months and two years is more reason to get a device, not less. A toddler's vocabulary increases exponentially during this time, and non-verbal children should be allowed to increase their vocabulary too.

I hope that Elanor's story will help some other parents learn not to listen when they are told their child is too young for a device. More than that I hope her story will convince some speech therapists to stop repeating this dangerous myth. After all, you're the experts, and what we as parents want more than anything is to be able to trust, to listen. 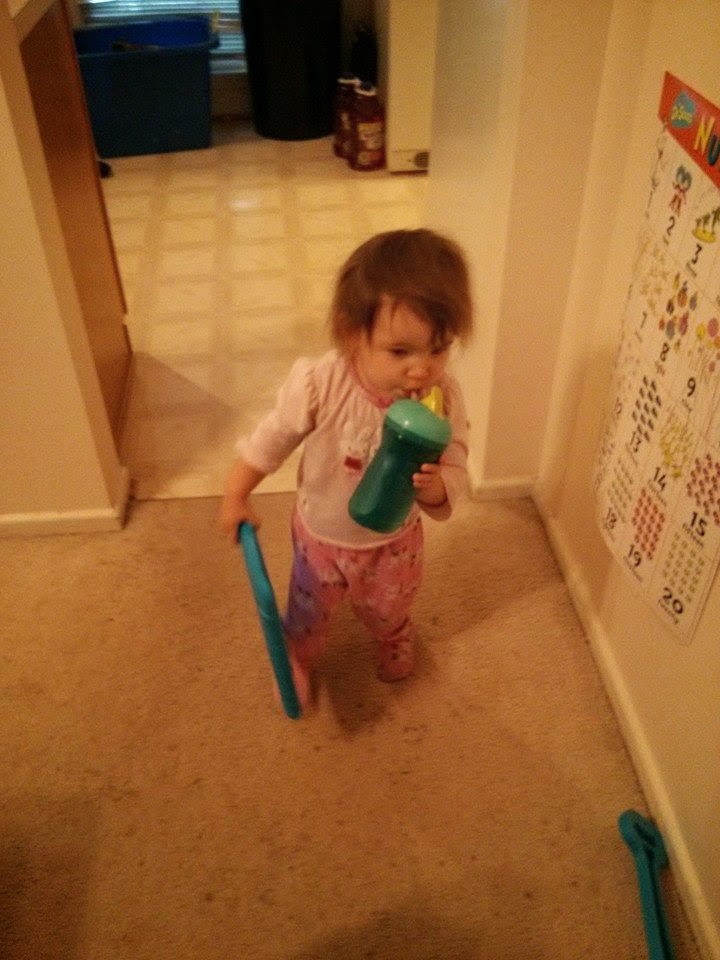